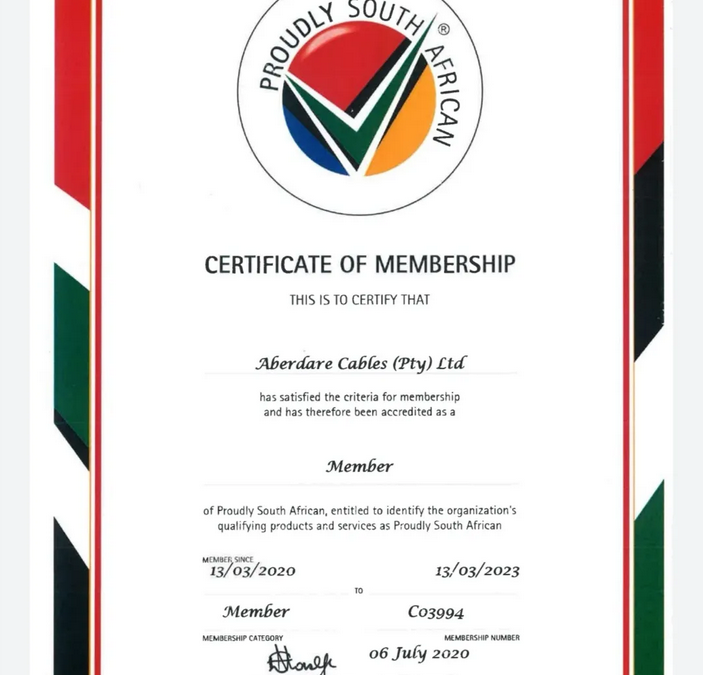 A membership certificate of Proudly South African was conferred on Aberdare, Hengtong’s South African subsidiary, recently in praise of its products and service.

Hengtong acquired Aberdare in 2016. As a leading cable manufacturing enterprise in South Africa with a history of more than 70 years, Aberdare was rated as the “first level” in the Black Economic Empowerment (BEE) Act assessment within three years after the acquisition. That only less than 10% of foreign investors in South Africa had achieved this level renders the company a local BEE implementation demonstrator. AberSchool, a cooperation project between Aberdare and Siqongweni, a local high school, has got a visit paid by President Ramaphosa, who acknowledged, among other things, its computer center, which was a donation of Aberdare.

Adhering to the commitment of “Social responsibility is the first responsibility of the company” and “Bring along and carry out responsibility wherever Hengtongers set foot on”, Hengtongers around the world have been creating benefits for the welfare of local communities and residents over the years. At the 2nd Job Fair of Chinese Enterprises and China-South Africa Economic and Trade Achievements Expo held  in Johannesburg in December 2019, the then Chinese Ambassador, Mr. Lin Songtian, commented, “China’s private enterprise Hengtong Group invested in South Africa’s Aberdare with only four Chinese executives on the ground but running three factories in three major cities and creating more than 1300 jobs for the local communities.”